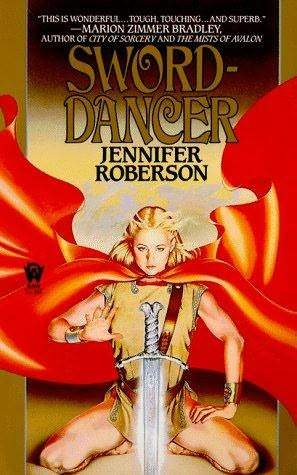 Summary (from goodreads): He was Tiger, born of the desert winds, raised as a slave and winning his freedom by weaving a special kind of magic with a warrior's skill. Now he was an almost legendary sword-dancer, ready to take on any challenge--if the price was right...or the woman pretty enough.

She was Del, born of ice and storm, trained by the greatest of Northern sword masters. Now, her ritual training completed, and steeped in the special magic of her own runesword, she had come south in search of the young brother stolen five years before.

But even Del could not master all the dangers of the deadly Punja alone. And meeting Del, Tiger could not turn back from the most intriguing challenge he'd ever faced--the challenge of a magical, mysterious sword-dancer of the North.


Disclaimer:
The book was published in 1986. It is Roberson's counter to the dude-bro fantasy that was churned out at the time.

Bit o Background:
I first read this series somewhere between 2003 and 2005. I remember enjoying the series, but don't remember anything about the plot. I'm going through a (slow) reread because Roberson released a 7th book in 2013 after a 11 year hiatus. I want to read the latest volume, but I need to reread the rest of the series to justify that purchase.

Thoughts:
Reads as if it were published piecemeal in a magazine and put together as a novel later. This is largely due to the repetitive padding. Most of it is dedicated to Del's sword, but also the dangers of the desert, Del's attractiveness, and Tiger's constant ego stroking. Tiger and Del make extremely stupid decisions, fall into trouble, manage to escape certain doom (usually by luck, not skill), and continue on to make more bad decisions. They are surprisingly well-rounded for such a short book and grew on me as more layers were peeled back. They aren't on some grandiose, epic quest to save the world. They just have a singular mission. In and out. One and done. Tiger will get his payment, Del will restore the honor of her family. Win-win.

The result is a fun ride I was able to easily put down after finishing a chapter or two and pick right back up later. (This is helpful for work breaks and dealing with children.)

Breezy read that can be read in chunks. Recommended if you enjoy fantasy and can take the Fair for It's Day approach to combating sexism.

Quibbles:
I forgot what total douche Tiger was. If this was filmed, he'd be played by Vince Vaughn (probably photoshopped onto Dwayne Johnson's body wearing He-man's costume). It is plot relevant, but was still off-putting at times.


*This is an affiliate link
4 review

Popular posts from this blog

Oh, hey, it's Easter.  Is it weird that I didn't even realize when Easter was until last week?  I've been slacking.
We colored some eggs.  Behold, eggs.
And.... did some Easter Baskets. (+ two non-baskets…
Read more