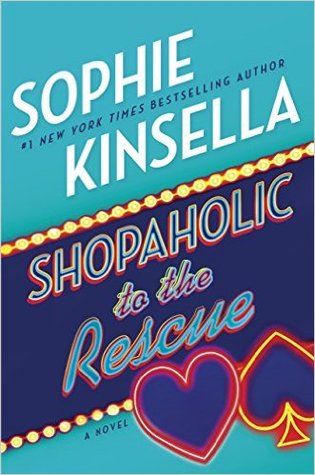 Summary (from goodreads): Becky Bloomwood and a hilarious cast of beloved family and friends (plus one enemy!) set off in a van to find her missing father, last heard from in Las Vegas.

Becky’s father Graham and her best friend’s husband, Tarquin, have disappeared from Los Angeles saying simply they have “something to take care of.”

But Tarquin’s wife Suze who is Becky’s best friend, and Becky’s mother Jane, are convinced the two men are hiding something and are in danger—their imaginations run wild. They must track them down!

Hijinks ensue as husband Luke drives Becky, daughter Minnie, Jane, Suze and other favorite Kinsella characters across country from LA to Las Vegas in search of the missing men.

Becky feels deeply guilty about ignoring her father while he was in LA, in addition Becky feels her enemy Alicia is threatening her friendship with Suze.

Edition Read: Overdrive through local library
Where (else) to buy: kobo*, google play, amazon*, nook*
Bit o Background:
First ever audiobook review! O_O
I got bored of listening to TV shows on my phone so I decided to check out what overdrive had via audiobooks. I used to love this series.


Full disclosure: If I hadn't listened to the audiobook I probably wouldn't have read this at all. I've actually checked the ebook out two or three times and have not been able to get past the first couple of pages.


Thoughts:
Good news: If you suffered through Shopaholic to the Stars only to be greeted with a cliffhanger... this book is better. It even has an ending!

Bad news: It's still not a good book.

A Shopaholic book that isn't a Shopaholic book. The characters are all there, but they aren't themselves. There is shopping involved, but it's not quite right. Outlandish misadventures happen, but instead of being silly and fun, it's boring and very, very, VERY long.

Part of the fun of the Shopaholic series is that it is kind of stupid, but also fun and hilarious. This one isn't fun and it definitely didn't make me laugh.

Becky gets into a bunch of trouble (because,shopping), this leads to a series of completely ridiculous and implausible events, and she eventually saves the day, everyone, and, most of all, herself.  Suze is the best platonic-life-partner. Tarquin is weird. Luke is loving, supportive, but also exasperated and closed off. The parents are lovable, but clueless.
The books are light, fluffy, mindless, and even a bit heartwarming.

This one does not fit into that same box.

Generally not recommended unless you are an absolute completionist and for whatever reason can not leave this alone.

It's a decent enough wrap up, but it lacks heart. If you're considering this series, I recommend stopping at either Shopaholic Ties the Knot (#3) or Shopaholic & Baby (#5).

Quibbles:
The narrator did a fantastic job, especially switching voices and accents, but when using an American accent, still pronounced the words with the British pronunciation even when playing a character with a heavy twang.

(I do feel like pointing out, again, that she did a really amazing job and if the narrating hadn't been any good, I would have written this book off completely since I couldn't even stand to read it.)

Email ThisBlogThis!Share to TwitterShare to FacebookShare to Pinterest
Labels: 2.5, review