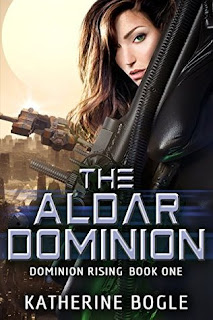 Summary (from goodreads):
The Aldar Dominion saved the world.
Then they damned it.

After solar flares decimated Earth’s population, the alien corporation gave humans a recipe for immortality and hope for the next generation. Cloning and the technology to transport consciousness from one body to another saved the human race from extinction. But the value of human life plummeted.

In an age when animal conservation no longer exists, Selene smuggles animals to safety. While fleeing Dominion drones during a mission gone wrong, Selene suffers a debilitating head injury. The pain unlocks memories from twenty lost years: stark labs and human experiments. These nightmares could hold the key to why natural-born human children are disappearing. But worse—they reveal a sinister plot centuries in the making.

Edition Read: Netgalley
Where (else) to buy: kobo*, amazon*, nook*


Disclaimer:
I received an advanced copy of this book through netgalley in exchange for a fair and honest review.

Bit o Background:
First netgalley approval since getting back into the reviewing game!

Thoughts:
A really slow start. I was a bit nervous with certain descriptions that this would turn out to be a Romance in Disguise, but this is not a romance novel. It's not the focus of the plot nor does it appear to be the purpose of the series.

I do want to address one thing.,,
Being creepy is NOT romantic.
Twice the male love interest slides in behind Selene as her door slides shut. (Once as she's about to take a shower.) That said, nothing happens. He doesn't try anything, he just wants to talk, but it could have been handled better. Highlight for minor spoiler:[ He's also her boss, so there's this extra dynamic.  ] Creepy ≠ sexy. I really can't say it enough.

The animal conservationist aspect is definitely a fresh idea. Although, it's noble work, but it's still just charity on their part.

The action is solid. Selene and her crew are accomplished fighters, but they aren't perfect and mistakes happen.

For a book that's only 250 pages long, a lot happens. There are a lot of characters that are introduced and then dismissed just as quickly. It has this sort of epic, arcing reach, while still being pretty short. I actually wish certain parts would have been longer to expand on certain aspects. I would have liked to spend more time with the crew before the book. I was informed of their relationships, but I didn't feel them because it was so brief.

The twist at the end has me wanting more.

Generally recommended if you like sci-fi action, government conspiracy, and a very tiny slice of romance. It's a short read where a lot happens.

Quibbles:
-"Lady bits" 🙄
-Ship docked exactly where it was before even though a long, but undetermined period of time has passed. No explanation given. We just sat here for no reason.

Email ThisBlogThis!Share to TwitterShare to FacebookShare to Pinterest
Labels: 3.5, review