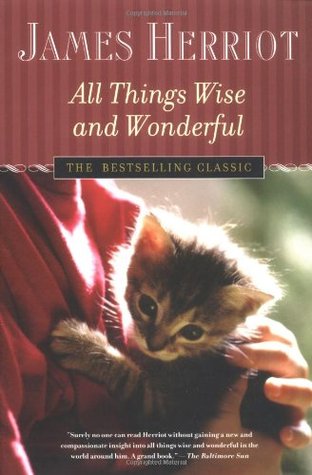 Summary (from goodreads):
The third volume in the multimillion copy bestselling series

Readers adored James Herriot's tales of his life as a Yorkshire animal doctor in All Creatures Great and Small and All Things Bright and Beautiful. Now here's a third delightful volume of memoirs rich with Herriot's own brand of humor, insight, and wisdom.

In the midst of World War II, James is training for the Royal Air Force, while going home to Yorkshire whenever possible to see his very pregnant wife, Helen. Musing on past adventures through the dales, visiting with old friends, and introducing scores of new and amusing character--animal and human alike--Herriot enthralls with his uncanny ability to spin a most engaging and heartfelt yarn.

Millions of readers have delighted in the wonderful storytelling and everyday miracles of James Herriot in the over thirty years since his delightful animal stories were first introduced to the world.

Pro Tip:
While I personally believe James Herriot's series is worth every penny, the ebook versions are published (at least in the US) by Open Road Media. Open Road Media has daily sales on various titles and I've seen these selling at a steep discount. It may be worth your while to hold out for a sale. They are also couponable at Kobo, if you can get your hands on a working code.

Bit o Background:
My dad is the one who got me into this series when I was in my teens.

As per the summary, this sort of focuses on his time in the RAF during WW2, but mostly it's flashbacks to being a vet before then. There are many great animal/people stories. Most of the military ones aren't great, although there a couple of good ones.

I recommend this to everyone, but I think that's obvious! (Particularly good if you love animal stories.)

Quibble GIANT PROBLEM:
I listened to the audiobook this time around and there is a HUGE mistake with the audio version. When switching to digital, someone clearly put one of the tapes or CDs in the wrong order. (Tape transitions can be heard from the intro and closing music) For the Audible version, in the middle of "chapter 50" (audiobook chapter, not actual book chapter), it switches over to the LAST tape, then switches back to the correct one in the middle of "chapter 55". I have checked the reviews and there is at least one complaint as far back as 2012 and it has still not been corrected in 2017. (If you would like to listen, wait for the music mid-chapter 50, then skip to mid chapter 55, might take a bit to find the intro music, and then switch back when you reach the "end" of the book.)

This did not take off points from the actual book as it is of no fault to the author or narrator, but clearly someone during the digital conversion process.