Bookish (and not so bookish!) Thoughts

Bookish and Not-So-Bookish Thoughts is a weekly blogging event hosted by Bookishly Boisterous. It allows book bloggers (and non-book bloggers) to write about pretty much anything, bookish or otherwise (i.e. share exciting plans for the weekend, rants on things they’ve encountered during the week, etc.).

1. Made vague attempt at bullet journaling again. It's only been a few days, but we'll see how it goes.

2. Started using Habitica again. Admittedly, this is a bit redundant when it comes to bullet journaling, but I'm trying. I joined a million challenges. I think I'm going to leave a couple, some are repeats (so I get to check things off twice!) and others are maybe too involved? idk. I'm testing the waters before I dive in and make my own challenges.

3. Worked both weekend days last weekend. That sounds like a weird thing to announce, but I've only been working one day a week lately. I need to stop that mess though! (School is starting up soon, so a good chunk of the kids are leaving so... more hours for everyone!)

4. The kids are dying to see The Emoji Movie. I just have not been able to stomach paying that kind of money to go see that movie. Well, when visiting my dad he made a deal with the kids that when it comes out on video he will rent it (via iTunes) and they can come over and watch it then. I do a lot for my kids, but that movie looks terrible... and I'm probably going to end up buying it for them for Christmas (if they end up liking it) anyway.

5. Just received a rejection from a netgalley request. I had mentally relegated to "too polite to reject" a little while ago. (Anything that isn't approved within 2 weeks is generally not going to approve you. Hell, even within ONE week!) So... that was weird.
I don't have enough followers, page reviews, or any sort of blog related social media presence to make me appealing to big name publishers. ;)

6. Finished my daughter's blanket. My arm is so tired. 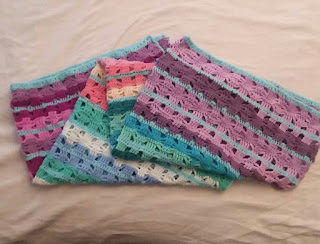 Popular posts from this blog

Oh, hey, it's Easter.  Is it weird that I didn't even realize when Easter was until last week?  I've been slacking.
We colored some eggs.  Behold, eggs.
And.... did some Easter Baskets. (+ two non-baskets…
Read more